Rivière-du-Loup, located 200 km east of Quebec City, has 3 parishes and St. Patrice is the oldest (1833) and the 2nd largest in the St. Anne-de-la-Pocatière diocese. It is also the mother church of famous organists who stood out in the organ history of Quebec: the Vallières, Girard and Lavoie.

Since 1683, the territory was served as a mission. A first chapel was blessed on February 12, 1791 on the located known as Pointe à la Grue. A second chapel, located on the south side of the King’s Way, blessed on July 12, 1812, replaced the first one that was too small. Parish registrers date from 1813. Development was so fast that in 1830, Rev. Louis-Ferdinand Belleau was appointed as first parish priest. The parish was canonically established on June 16, 1833. St. Patrick was chosen as the patron saint of the parish because many parishioners were from Irish descent.

Parishioners soon became exasperated with the smallness of the chapel and its delapidated state. Since development was going faster on the east of the church, some parishioners wished the new larger church be built in the center of the development upon land donated by Seigneur William Fraser. This is the location of the actual church. For numerous years, people from the village and people from the countryside disagree upon the location of the new church. There had even been some confontations before the construction befan in 1856. The first solemn mass was sung in the new church on Christmas night 1856.

Following the fire of February 24, 1883, set by a faulty wood heating system, that destroyed most of the church, a new building was set up, during the same year, inside the original stone walls that were left standing up. Architect Napoléon Bourassa, from Montréal, was commissionned to prepare the new plans. Works were executed under David Ouellet’s supervision who worked for contractor Joseph Gosselin, from Lévis.

Upon parish priest Blais’ initiative, the church was rebuilt upon the ruins of the previous one, a project that cost $48,600. Original plans of the destroyed church, prepared by architect David Baillairgé, in the Gothic style, were respected. The church was stately rebuilt and was the parishioners’ pride. Its blessing took place on January 9, 1884. The present bell-tower is 230-feet (67 m) high and is topped by a 14-feet (4.25 m) high iron cross. It houses 3 bells while the small bell-tower, located above the chancel, houses the fourth one. The bells were blesses on January 20, 1884 by Archbishop Elzéar-Alexandre Taschereau, from Québec.

The following year, the interior was painted and completed by the addition of sculptures, installation of pews, of the churchwardens’ pew, and the confessionals. The high altar, executed upon plans prepared by Napoléon Bourassa, was blessed on June 28, 1891. In the nave, 12 wooden statues, each measuring 6 feet (1.8 m) tall and depicting apostles and evagelists, were executed by sculptor Louis Jobin, between 1890 and 1905. The large painting behing the high altar was executed by Charles Huot, from Québec. Measuring 14 feet (4.25 m ) by 22 feet (6.7 m), it was set in place in 1900. The Way of the Cross, another work executed by Charles Huot, was installed in 1902. The actual churchwardens’ pew was installed in 1906. The pulpit and the stairs were executed by David Ouellet, but David Lavoie helped with the construction of the stairs in 1915. Electricity was introduced in the church in 1897 and the actual chandeliers, in the nave, were installed in 1955.

In 1915, major works were carried out to enlarge the chancel and the organ gallery while a new coat a paint was set on the interior and the exterior of the building. On July 25, 1955, Bishop Bruno Desrochers, from St. Anne-de-la-Pocatière diocese, consecrated the church. In 1970, paint and guilding works were executed inside the church. A new flooring was also executed.

In 1997, cement in the façade was repaired and about one hundred stones had to be replaced. In 1999, the vestry was renovated. 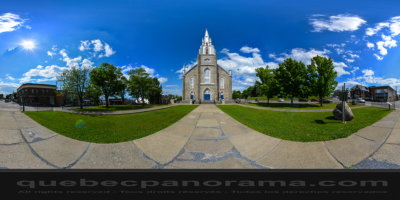 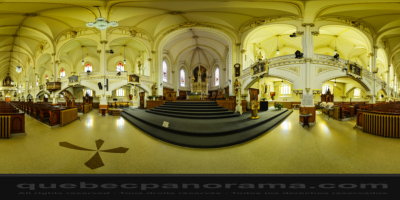 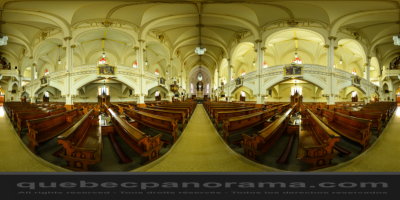