The Olympic Stadium is a multi-purpose stadium in the Hochelaga-Maisonneuve district of Montreal, built as the main venue for the 1976 Summer Olympics. The stadium is nicknamed “The Big O”, a reference to both its name and to the doughnut-shape of the permanent component of the stadium’s roof; “The Big Owe” has been used to reference the astronomical cost of the stadium and the 1976 Olympics as a whole.

The stadium is the largest by seating capacity in Canada. After the Olympics, it became the home of Montreal’s professional baseball and Canadian football teams. Since 2004, when the Montreal Expos relocated to Washington, D.C., the stadium has no main tenant, and with a history of financial and structural problems, is largely seen as a white elephant. It currently serves as a 56,040-seat multipurpose facility for special events, and continues to serve as a 66,308-seat venue for playoff and Grey Cup games hosted by the Montreal Alouettes. The Montreal Impact also use the stadium on occasion when a larger capacity venue is needed or when the weather restricts outdoor play in the spring months.

The Tower of Montreal, the tower incorporated into the base of the stadium, is the tallest inclined tower in the world at 175 metres. The stadium was designed by French architect Roger Taillibert to be a very elaborate facility featuring a retractable roof, which was to be opened and closed by a huge 175-metre tower – the tallest inclined structure in the world, and the sixth tallest structure in Montreal.

The Olympic swimming pool is located under this tower. An Olympic velodrome (since converted to the Montreal Biodome, an indoor nature museum) was situated at the base of the tower in a building similar in design to the swimming pool. The building was built as the main stadium for the 1976 Summer Olympic Games. The stadium was host to various events including the opening and closing ceremonies, athletics, football finals, and the team jumping equestrian events. 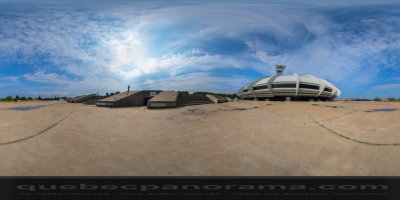 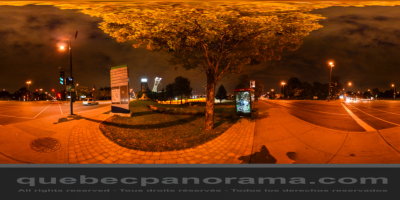